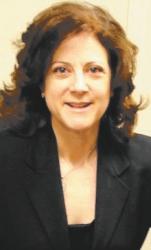 (by ANNA WALTERS Reporter) Mary Ellen Haefner has a goal to make Main Street in Williamsville more walkable and appealing, and is working to take the next step forward.

At a recent Village Board work session, Haefner presented her vision to officials. Her objective is to make the history of Williamsville more apparent on Main Street through contemporary modes of signage.

“She came up with the idea on her own and wanted to apply this to the village she loves; it’s just tremendous,” Williamsville Mayor Brian Kulpa said. “It’s something we see time and time again from business members to residents in the community who want to get involved.”

Through One Region Forward and participating in Champions for Change, Haefner has developed her engagement.

According to One Region Forward’s website, it is a collaborative effort promoting more sustainable forms of development, in both Erie and Niagara counties, involving housing, transportation, energy and land use.

Kulpa says it would be a great project to work with.

“We’re just kind of getting to know it; it sounds promising,” he said. “We really want to not just make [Main Street] pedestrian-accessible; we want to make it so people have an enjoyable walking experience.”

Kulpa says the signage can be something as simple as a printed sign or as dynamic as a glass-encased note.