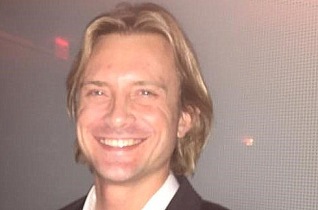 He had seriously studied yoga for just about a decade. But after immersing himself in the practice, he soon became a talented practitioner and teacher, traveling the world to share and learn yoga.

But he will be best remembered for the charismatic personality that enabled him to connect easily and deeply with people, said his family.

Mr. Collins, of Buffalo, died unexpectedly in the home of friends near Rochester, with whom he was staying, on Jan. 9, 2019, after a long struggle with mental illness. He was 40.

He was born April 3, 1978, in Buffalo. His family moved around during his childhood, said his younger sister, Christine Collins-Schwinger, but they settled in Amherst, where Mr. Collins graduated in 1996 from Amherst Central High School.

He studied biology at Binghamton University, where he belonged to the Binghamton Crosbys, an all-male a cappella group. In 1998, he performed with the group at Carnegie Hall in the National Championship of Collegiate A Cappella. He graduated from Binghamton in 2000.

After graduation, Mr. Collins lived in New York and North Carolina with Kristy Miller, who would become his wife and the mother of his children. In North Carolina, his sister said, “he took just one or two software programming classes in a community college, then he decided that’s what he wanted to do and sort of built up his career.”

After they married, they returned to Buffalo, and Mr. Collins began working at LocalNet around 2003. After a few years, he took a job at Synacor Inc., where he spent more than seven years as a software architect.

“He was brilliant, and such a fast learner when he decided he was going to learn something,” said his sister.

Mr. Collins earned an MBA from the University at Buffalo in 2008.

In 2014, he worked with Sean Parker on the video chat platform Airtime, and in 2015, he worked as an independent contractor for PayPal.

Mr. Collins took a yoga class in college, then became an avid yogi around 2009, said his sister. In a short time, “He became a yoga master,” she said. He studied for years with world-renowned prana vinyasa practitioner Shiva Rea and branched out into other types of yoga. “He was so proficient,” said Collins-Schwinger.

He made many trips to Mexico, and also visited Nepal, India, Indonesia and Thailand to explore, experience and practice yoga, his family said. He also taught yoga classes in Buffalo, Bali and Thailand, among other places he visited. He returned home in October 2018 after his final trip, which was to Israel, his sister said.

Mr. Collins was an avid dancer who often posted videos of himself on social media, said Collins-Schwinger. “He would sing to anybody,” said his sister. “He was a world traveler, and sometimes he would just get out his ukulele and sing to the people who were around him.”

He was open to new ideas and loved to learn new things, said his family. “He was incredibly charismatic and charming,” his sister said.

Mr. Collins was deeply spiritual, founding and leading the “Church of One Divine Love: The Church of Unity Under One God of Love,” which was tied to his yoga practice.

“He will be missed,” his family said.

Besides his sister, Mr. Collins is survived by a daughter, Anna; two sons, Drew and Bailey; his mother, Mary Collins Sanborn; and his stepfather, Robert Sanborn.

Courtesy of the Buffalo News, read original by clicking here—>