On the Front Lines: Matt Dauria ’87

It’s 7:30 AM and Matt Dauria reports for duty — he has a long day ahead of him. As a manager in Environmental Services (ES), it is his job to lead his team to ensure patient safety, campus cleanliness and overall satisfaction. The day shift starts with a team huddle, during which everything from patient censuses to changes in procedure are discussed, before ES members are dispatched for the day.

Since the launch several weeks ago of the emergency response plan to COVID-19, Environmental Services has ramped up its efforts to make the Roswell Park facilities as safe as possible for our patients and staff members who continue to work on campus each day. Notably, the ES team transitioned from a two-shift model to a 24/7 operation to keep all of Roswell Park clean and well-serviced. The ultimate goal, Matt says, is to take patients’ minds off their current situations, a mission inspired and perpetuated by the CARES training that is part of every ES meeting. 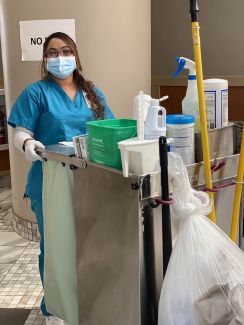 The training — CARES stands for Compassion, Accountability, Respect, Enthusiasm, and Service — is evident whenever you pass an ES team member and receive a cheery “hello.” That excellence is underlined by the scores our ES team members receive: in a 2019 Press Ganey patient satisfaction survey, Roswell Park scored 90.9 in cleanliness and 93.6 in courtesy. The scores placed Roswell Park in the 88th and 93rd percentile in these categories nationwide.

“Service is part of what we are,” Matt says of the ES team. Some ES duties lie strictly within staff job descriptions, and other duties extend to outside areas. “Whatever needs to be done,” he explains, whether it’s setting up for an event or finding an extra blanket for a patient who is cold. Matt trains his team to be observant when entering patient rooms, encouraging them to ask patients about their greeting cards or personal mementos.

Matt attributes his success to that of the entire Environmental Services team. “I couldn’t do what I do without my whole team behind me,” he says. Matt has worked in healthcare facilities management for more than 30 years, in most of the health systems in Western New York, and at systems in Ohio and West Virginia. While Matt came to Roswell Park as part of a contract position, he says he works for Roswell Park’s mission: “We do one thing: fight cancer.” He believes this mission is specific, direct and encompasses everything we do as one Roswell Park team.

Senior signs to start showing up around the district

Through the combined efforts of the Amherst MS/HS PTSA, Amherst Tigers Booster Club and the Amherst Central Alumni Foundation, each senior high school student will receive a law sign to display at home. With the Covid-19 crisis forcing the closure of schools in the district since mid-March, this a great way to show some Tiger Pride towards the Class of 2020.

Bruce D. Burr spent 36 years working at Smallwood Drive School in Snyder – most of it as principal – before retiring in 1994.

“He adored that school,” said one of his daughters, Elizabeth B. Elliott.

And the feeling was mutual.

“No matter where my parents traveled, people would recognize them – ‘Dr. Burr, Dr. Burr!'” said his daughter.

Luckily, the longtime principal had a gift for remembering names and faces, so even if the student had graduated 20 years earlier, he could greet them by name, his family said.

A resident of Asbury Pointe,Getzville, he died April 19 in Millard Fillmore Suburban Hospital, Amherst, after being hospitalized 10 days earlier with Covid-19. He was 87.

“As a principal, his administrative style was to find excellent teachers, create an environment where they could thrive, and then let them teach,” said his son, Peter A. Burr. “He took great pride in the high quality of education provided by Smallwood Elementary School. He was grateful for the support of Smallwood School District residents, which he deemed a very important factor in the success of the students.”

An Army veteran who led the school in the Pledge of Allegiance at every assembly, Dr. Burr loved camping, hiking and nature study, and was a supporter of Smallwood Drive School’s Outdoor Education curriculum. An Eagle Scout, he volunteered as assistant scoutmaster for Troop 278 for a short time.

He was born in Buffalo, the first of two sons of Harold Llewellyn Burr and Alice Strebe Burr.

He graduated in 1950 from Kensington High School, where he played intramural basketball, football and baseball and was the 1950 Buffalo All-High Chess Champion, as well as a Buffalo All-High Tennis Doubles Champion.

He served until late 1957 as a Private 1st Class in the Intelligence School at Fort Holabird in Baltimore, and was an instructor in counter-intelligence.

On May 28, 1955, he married Barbara C. Scheitinger in Buffalo. They raised their children in Snyder.

“Every summer, we took a trip somewhere – all five of us and the dog!” said their daughter Elizabeth. The trips were typically to a national park or place of historical significance, such as Washington, D.C., Philadelphia, Williamsburg or Gettysburg. “After all, there was always learning to be had!” she said.

Dr. Burr began his 36-year career at Smallwood Drive Elementary School in 1958, when he was hired as a teacher, a position he held for one school year. The next year, at 27, he became assistant principal. He was principal of the school from 1975 until he retired in June 1994.

In 1961, he received a National Science Foundation Grant for math education and spent the summer taking classes at Rutgers University.

He received a State Administrator’s Award for his support of the Smallwood School library and in 2013, received a Distinguished Educator Emeritus Award from the Amherst Central Schools Alumni Foundation.

He was a longtime member and served in leadership positions at Christ United Methodist Church in Snyder.

“He was a humble, modest man,” said Elizabeth Elliott. “His faith was very important to him.”

In retirement, he and his wife enjoyed traveling. An avid toy train collector, with most of his collection dating from his childhood, he especially enjoyed leading train trips for toy train enthusiasts in Europe and the United States.

He and his wife volunteered at Friends of the Night People and Habitat for Humanity.

The Burrs spent summers at the Chautauqua Institution, where they assisted with the renovation of the United Methodist House, for which he served as president of the Board of Trustees.

The couple spent winters in Dunedin, Fla., and were avid antiques collectors.

He was an accomplished bridge player and enjoyed golf. He adored his grandchildren and rarely missed a game, concert, play or event, his family said.

Besides Barbara Burr, his wife of nearly 65 years, he is survived by two daughters, Carolyn S. and Elizabeth B.; a son, Peter A.; and five grandchildren.

The family is planning a memorial service at his church at a later date.

Courtesy of the Buffalo News:

Jacquelyn “Jackie” Marie Brendel-Kean, loving wife, mother, and grandmother, passed away suddenly at the age of 59 on April 10, 2020.  Jackie was born August 29, 1960 in Buffalo, NY to the late John and Beverley (Cryer) Brendel. She was also preceded in death by a sister Karen Brendel.

She graduated from Amherst Central High School in Snyder, NY (1978) and got her nursing degree from the University of New York at Buffalo (1982).  She went on to get her Master’s Degree from the University of South Florida (1991) and worked as a Nurse Practitioner for 29 years. On October 17, 1998, she married John William Kean. They raised one son together, John William Stubbs.  Jackie had a passion for helping others. She also loved to spend time with her family and pets. She was a caring and compassionate person who would help anyone in need.  She was known for her willingness to help others, her infectious smile, and her kind, gentle and caring soul.  Jackie was also a breast cancer survivor.

The family chose cremation and a memorial service will held at a later date.  Her final resting place will be at the Church of the Good Shepherd, 96 Jewett Parkway, Buffalo, NY 14214.  Stotts-Phelps-McQueary Funeral Home is charge of the arrangements.

If anyone would like to make a donation in memory of Jackie, please send them to the American Cancer Society, Kentucky Heritage Land Conservation Fund, or Church of the Good Shepherd.

“I checked in with Carolyn Catalano at the Tigers Den Food Pantry and they are so grateful for our help. They recognize that people are minimizing their trips to the grocery store but indicated that they need juice, tomato paste, spaghetti sauce and snacks to help even out their shelves.”

The Tiger’s Den is located at St. Paul’s Lutheran Church, 4007 Main Street, Eggertsville, NY 14226 (next to Brunners!) Mailed items can be sent to that address Attn: Carolyn Catalano/Tiger’s Den

Items can be dropped off during the following operating hours:

Here is link to our original post on helping the Tiger’s Den Food Pantry.

Help out if you can, Tigers.