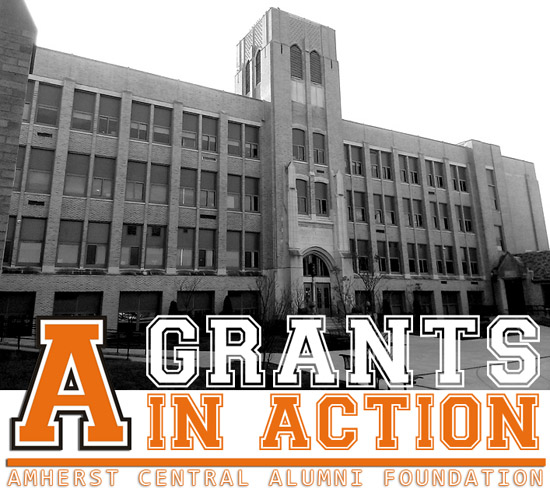 As part of the Amherst Central Alumni Foundation’s grant program, we help fund various programs throughout the school district. The foundation will periodically receive material highlighting what one of our grants has accomplished. One of the initiatives funded was the Everyday Counts grant at Amherst Middle School.

Here is an overview by Shari Bauda School Counselor at Amherst Middle School of what the grant achieved.

I wanted to share with you and the Amherst Alumni Association an update on what we have been accomplishing here at AMS with the generous grant money you provided us. We kicked off our “Every Day Counts” initiative this past month with outreach to families and shared research based information showing the correlation between consistent school attendance and academic success. Students participated in a program during their lunch a few weeks ago and everyone in attendance received a pencil to use with the reminder that “At AMS, Every Day Counts!” 12 students, 4 from each grade level, were chosen randomly by our newly formed student “Attendance Squad” to receive incentives for their perfect attendance thus far in the school year. They were excited to choose from gift certificates for local restaurants,school bookstore coupons for free merchandise, ice cream passes and more.We will do this after each 5 week period.We now post all names of students every 5 weeks who have perfect attendance on our NBA(Never Been Absent) All Stars Wall.

Thank you so much for your support of this initiative. The grant has made this all possible! I have attached some pictures for you to see.

Through the generous support of Amherst Alumni, you helped make this happen.

Posted by amherstalumnioffice on October 27, 2016
Posted in: News. Leave a comment

Christina is also looking for any alumni willing to speak to her classes about their career path and offer advice.

Recently Dr. John Schriver ’55 and Anne Harding Joyce ’70 met with Christina’s students and it proved very successful. She’s hoping other alumni will volunteer to share their careers and advice with her students. If interested, please contact Christina directly at cevans@amherstschools.org.

Do you want to check out the weather directly from the Amherst Central School District? The Amherst Middle School just launched its very own weather station yesterday!

From an email about the launch:

I am excited to share with you this afternoon that we have launched our very own weather station at the Middle School. Thanks to a collaborative effort between Drew Schmidle of the Middle School Library, and 7th grade science teachers Stacey Susi and Nancy Claxton for working to make this happen.  Also special thanks are in order to Middle School Principal John Griesmer, Middle School Head Custodian Rick Kraft, and Middle School Science Department Chair Susan Cramer for their support and assistance.

Please use the following link to view the live feed from our station. Also, if you are so inclined, please download the “wunderground” app to any of your mobile devices so you can get our weather on the go! Thank you for your time, and may we have sunny days ahead! 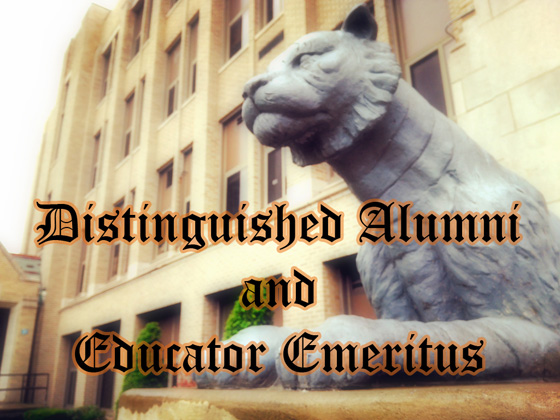 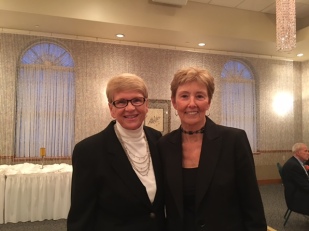 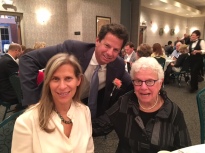 Make your reservations for the Distinguished Alumni and Educator Awards reception on Thursday, October 20, 2016 from 5:30-7:30pm at the Fairdale Banquet Center, 672 Wehrle Drive, Amherst, NY 14225.

To make a reservation and find out more about awards, follow this link—>

The Amherst Central Alumni Foundation is helping the arts in Amherst Schools by offering seat dedications on the back of seats in the Theodore L. Masterson Auditorium in the high school. Funds raised go directly to programs in the school through our foundation grant program.

Your donation includes an engraved name plate on a seat in the auditorium. You can dedicate a seat to yourself, a family member, loved one, business, etc.

To find out more information and to dedicate your seat, click the link below. 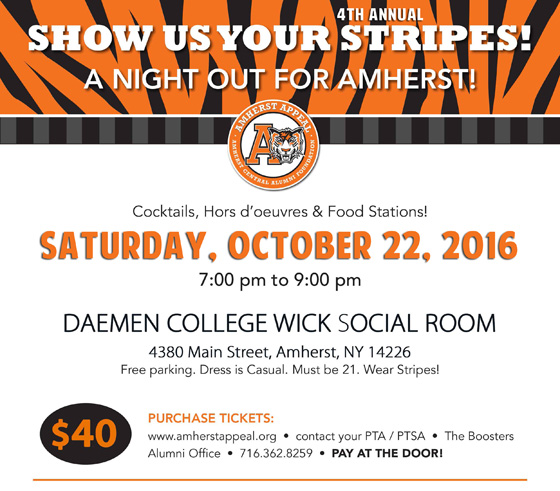 Please attend this special celebration of our Schools and our Amherst Community!

This is a fundraiser and an all-community celebration to benefit the students, teachers, parents, alumni and neighbors of Smallwood, Windermere, Amherst Middle and Amherst High Schools.

For more information on the event and to purchase tickets, click the following link—>

Submit your alumni news via https://tigertracksonline.wordpress.com/submit-alumni-news/.